In recent years, the increasing number of cars obtaining top marks for adult occupant protection in Euro NCAPs tests has led some to demand the introduction of a new benchmark and a sixth star.

However, results announced today by Euro NCAP prove that whilst some manufacturers are forging ahead in their safety development, others still have a long way to go.


Of the six cars tested by Euro NCAP in this recent phase, only two achieved the top five star accolade for occupant protection in Europe s leading independent crash tests.

I am pleased to see that two of the six cars have achieved a maximum five-star rating for adult occupant protection. It is reassuring that more and more car companies are now placing an emphasis on safety and we are happy to recognise their achievements.

However, we want to encourage the highest levels of safety in all cars and, in that regard, there is still work to be done. Euro NCAP will continue to provide consumers with the best information available regarding the safety of new cars.

The Chevrolet Aveo was singled out by Euro NCAP for the unacceptably high risk of life-threatening injury to the drivers chest, which was highlighted by the frontal test. As a result, the cars final star was struck through. Although the Aveo scored enough points overall to qualify for three stars, Euro NCAP insists on a minimum level of performance in each of the frontal and side impacts. While the Aveos performance in side impact was good, it did not score enough points in the frontal test to be given a three-star rating.

Yet, the Chevrolet was not the only car to come under Euro NCAPs scrutiny. The Kia Cerato obtained poor results in the side impact tests with a high risk of injury to the drivers chest.

In contrast, the Peugeot 207 joins the growing list of superminis to be awarded the five-star Euro NCAP rating in adult occupant protection, proving that even the smallest of cars can be safe on European roads.

I am pleased to see that Alfa Romeo achieved the coveted five-star Euro NCAP rating for adult occupant protection, yet I am disappointed that they have not shown the same commitment to pedestrian protection. There is a clear difference emerging between those car manufacturers who are trying to improve the protection their cars offer to pedestrians and those who still see that as a low priority. When cars can achieve creditable results without any advanced technology, there is no excuse for the very low levels of performance we have seen in this phase. There is no reason why cars cannot now provide a high level of protection to all road users.

It has been indicated that the facelift includes improvements in safety and Euro NCAP can only conclude that the safety performance of the Kalos will not be as good as the Aveo. In any case, as our assessment was made on a saloon car, we can not be sure that the three/five door car will have the same performance.

1. The strike through is used to show that there was a serious risk of life threatening injury to one body region. In the case of the Aveo, the driver was at severe risk of injury in a frontal impact test at 64/km/h.

2. Organisations participating in Euro NCAP include the Departments of Transport of Sweden, The Netherlands, France, Germany, the United Kingdom and Catalonia, the FIA Foundation, the Allgemeiner Deutscher Automobil-Club (ADAC), Thatcham on behalf of the British Motor Insurers and the International Consumer Research and Testing (ICRT) on behalf of the European consumer organisations. Euro NCAP is also supported by the European Commission.

3. The results for Phase 17+ are announced on-line and will be available on the web-site on 24th February 2006.

4. Future launches will continue with the testing of new cars in all segments.

8. Comparison between Size Categories: It is essential that no attempt is made to compare the ratings between cars in different segments or mass groups. The frontal crash test aims to measure the performance of the car impacting another car of similar mass. There is no capability to determine what would happen if cars of widely different masses impact each other. It is not primarily the mass difference that has the effect but the effect that mass has on the structural stiffness combined with the relative height of the structures from the ground.
_________________
Hal 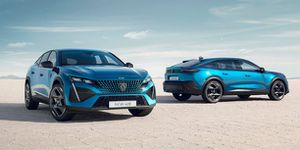